As promised here is part 2 of Glacier National Park. This park is so expansive it deserves multiple posts.

Today’s post features time spent on the east side of the park at Many Glacier.  As I mentioned in the last post we were up early in order to score our campsite at Avalanche Creek.  After stopping briefly at Logan Pass we decided to venture on to explore the east side of GNP.  And it was completely worth the drive.   The mileage from Logan Pass was 39 miles with a drive time of over an hour.  (Our total mileage, leaving from our previous campsite at Bowman Lake, 101 miles.)

After arriving in Many Glacier, I was pleasantly surprised to see they had public showers available, as there were none available where we were camping.  A long hike followed by a much-needed shower, perfect. After consulting my travel book, Iceberg Lake was calling my name.  The biggest problem at GNP is which trail to choose. There are so many.  But I could not resist the urge to see icebergs floating in the lake during the hottest month. Ironically as I write this post, I just realized this day last year we were leaving this spectacular park.

With that, I leave the photographs to tell the rest of the story. Breathtaking views and a truly rewarding hike made leaving extremely hard.

The start of the hike.  A ten-mile round trip hike awaits. 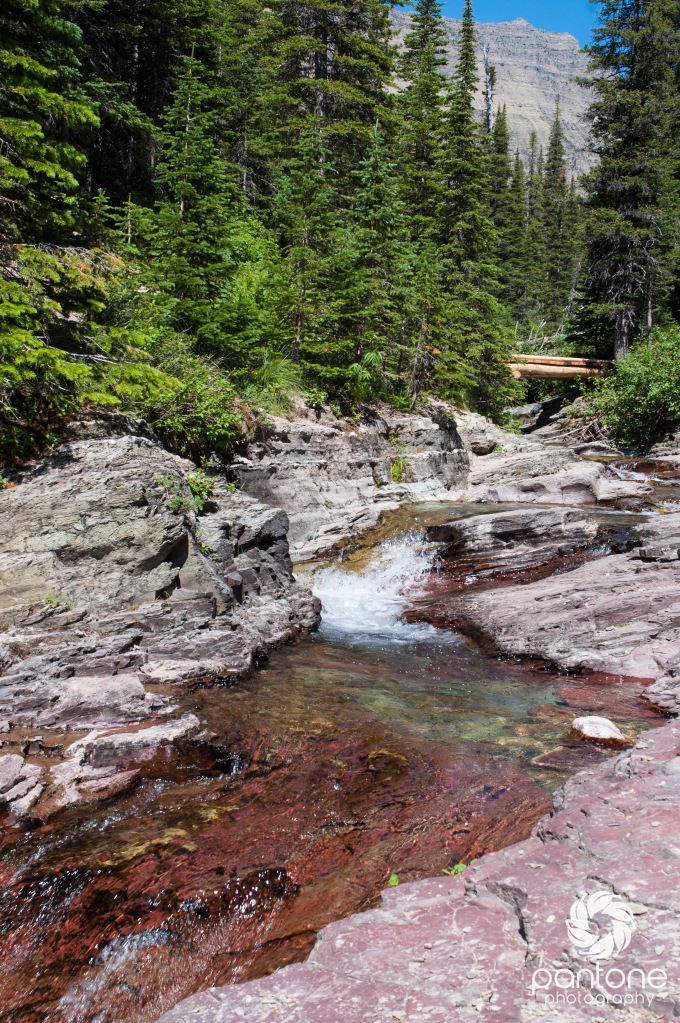 A refreshing spot along the way.

A moose sighting along the trail.  He was pretty far away, this was the best I could get with my zoom lens. 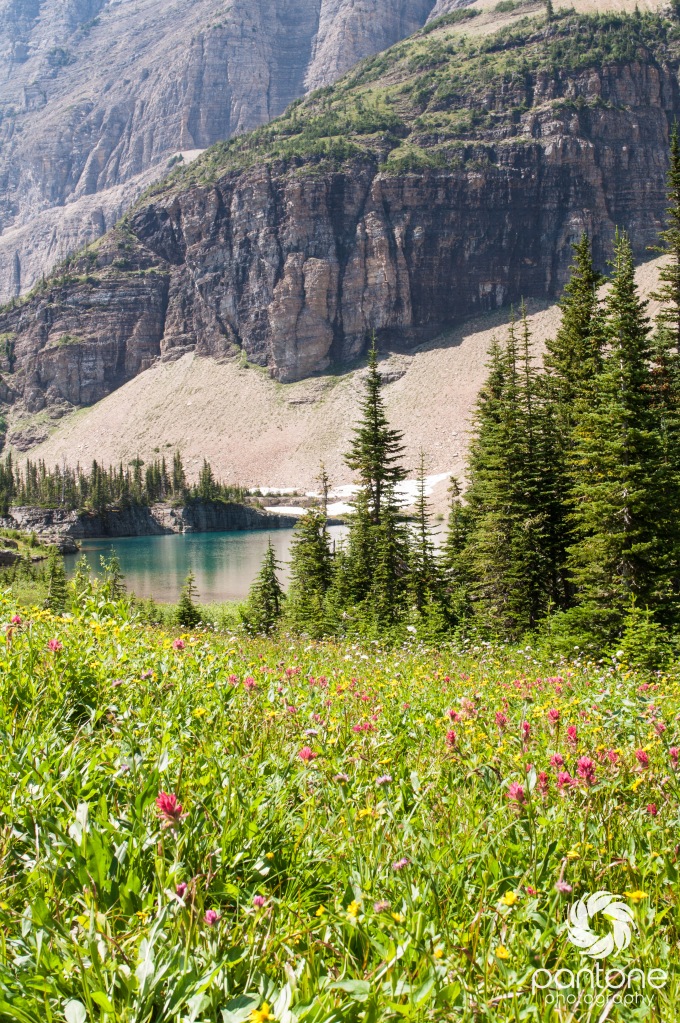 Almost there! This is an overflow lake from Iceberg Lake.  Loved the wild flowers in bloom!

Iceberg Lake, with a blue hue I have never witnessed before and surrounded by glacier cut mountains. My current wide angle lens could not begin to capture the entire scene.  Stunning color and icebergs floating in the lake!  Time for a closer look.

Wow, it looks so refreshing and clear! 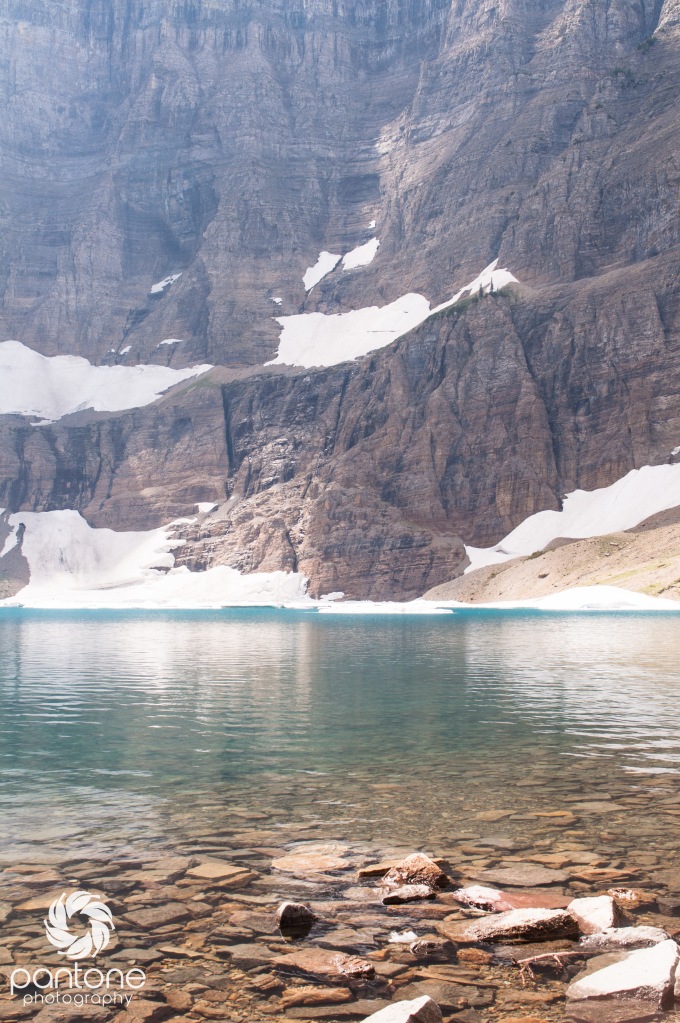 It looks very refreshing, but extremely cold.  Remember there are icebergs floating in this beautiful lake. While we enjoyed lunch we watched a few brave (or crazy might be the better word) people go for a dip.

A son challenges his dad to go in.  The cold literally took their breath away.

Brrrr…submerged in icy cold water but they have bragging rights, they swam with icebergs.

I decided to test the waters but only ankle-deep. It was so cold it hurt.  I have no idea how people were diving in. COLD!

My reaction tells it all. Time to get out.  I should mention, everyone that decided to go for a dip, retreated quickly.

A close up of one of  the icebergs.

After spending a couple of hours lakeside it was time to say our goodbyes. 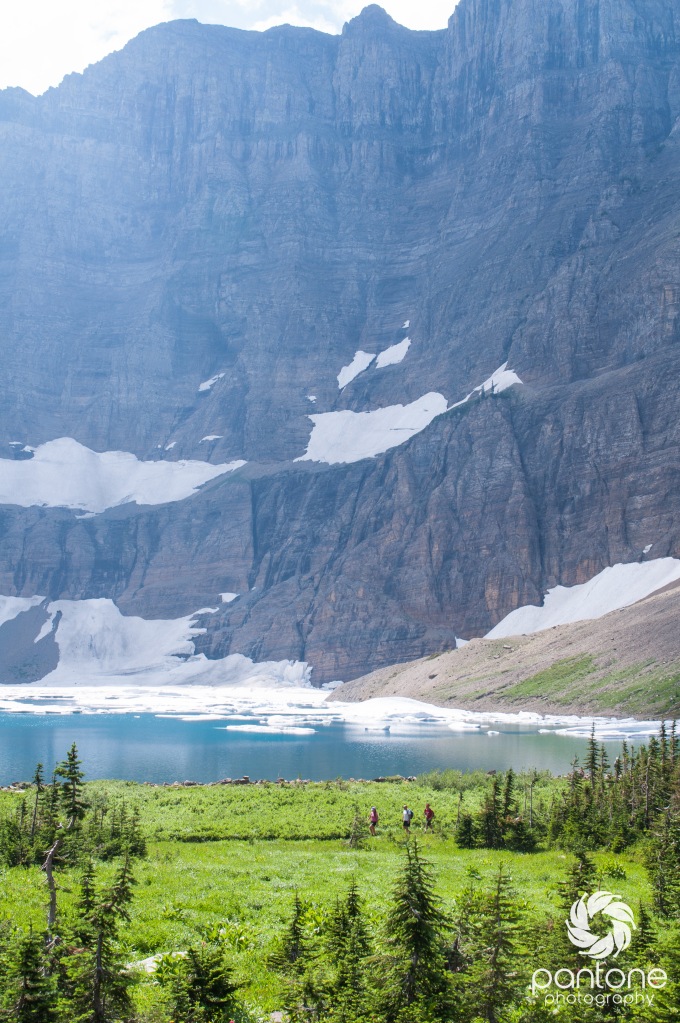 I could not stop turning around for “one last look”. What a place! 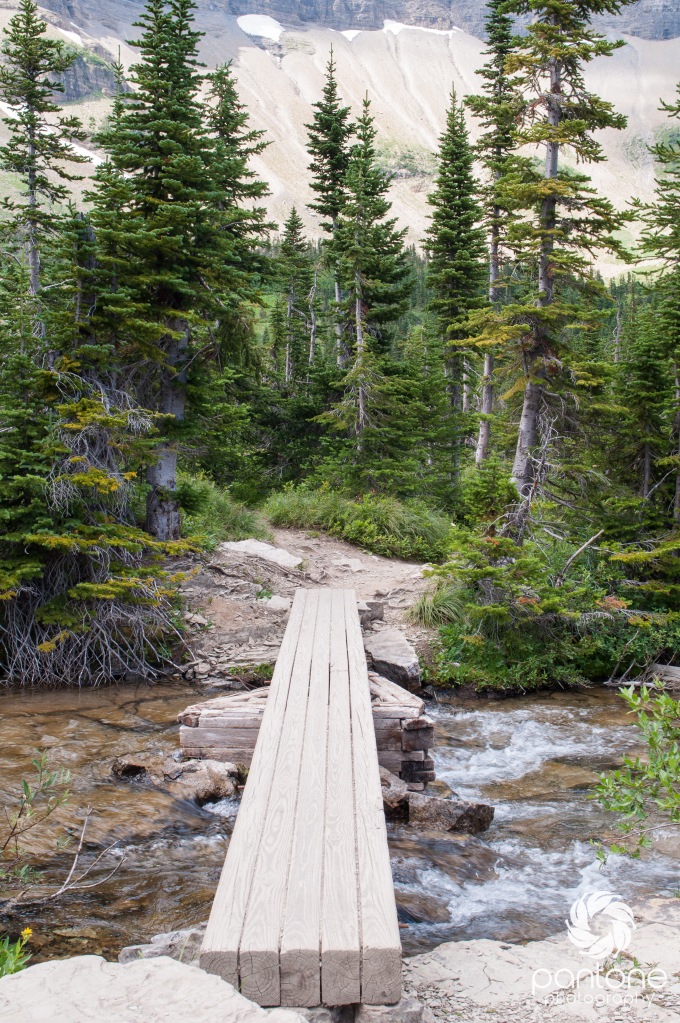 Crossing a foot bridge on the way back. 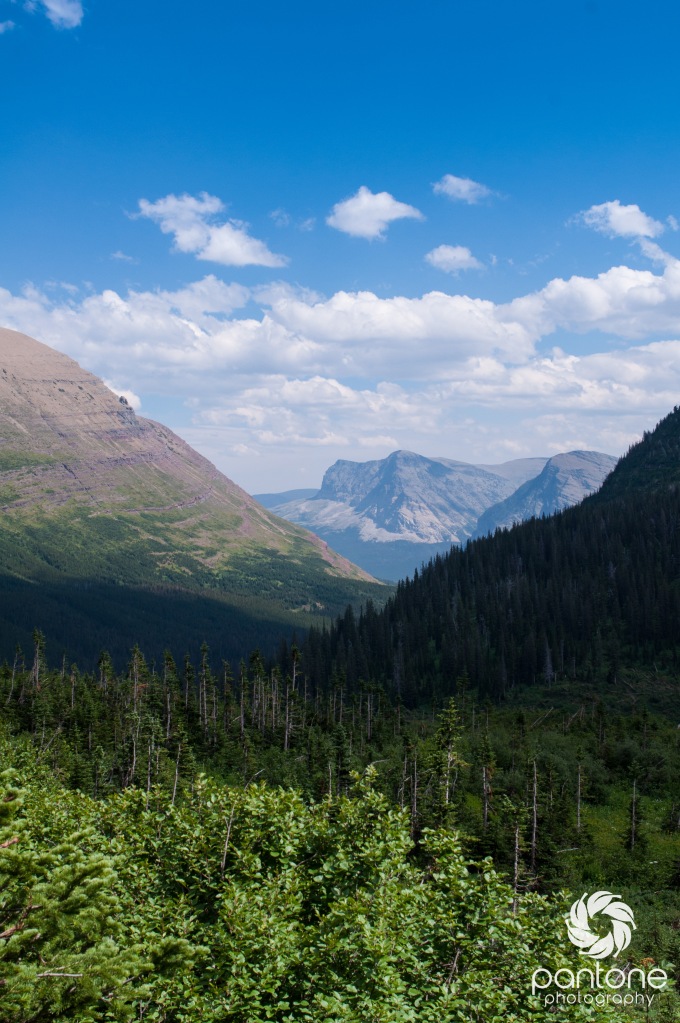 The view looking out to where we started.  Breathtaking.

While hiking we made sure to make our presence known, by making noise and talking loudly. We did not want to surprise a bear on this trail.

Following our hike we enjoyed a refreshing shower and dinner at the Italian Garden, attached to the Swiftcurrent Motor Inn. With full stomachs and sore legs, it was time to head back to the west side of GNP. Along the way we found ourselves behind a rookie Going to the Sun Road driver. She had the four classic signs.

The last one was the most frustrating, Going to the Sun road has numerous pullouts along the way to allow for slower, less experienced drivers to pull over and allow traffic to pass. In our case, the rookie driver had 10 cars behind her.  She should have pulled over.

Instead of staying frustrated we opted to stop outside of one of the tunnels and walk back through, where an alcove framing Heaven’s Peak made for a nice view.

Another beautiful day coming to an end at GNP.

Up next time, unexpected visitors to our campsite, a relaxing day alongside Lake McDonald and a hike to Avalanche Falls.