It was an overcast fall day, the last great weekend of fall foliage.  Many of the trees had already dropped their leaves, leaving behind splashes of color here and there.  Dean was interested in doing something different for his photos.  He arrived in his fall flannel and ready to dive right in.  With time on our side, we started out casually on the porch.  I set up a bar stool for him to lean on while playing guitar.  My goal, to capture him in his element, doing what he loves.

He relaxed into playing and singing right away.  It was as if I was not around.  Perfect!  As I snapped away, I simply enjoyed the music.  Occasionally interjecting another pose or to instruct on where to look.  We spent the afternoon moving from one spot on the property to another.  Despite many of the trees being bare, there were plenty of great opportunities to capture exactly what he was looking for.  Rugged, country and the real Dean Cazee.

Along the way he had some ideas he wanted to try out, as did I.  Some worked and some did not.  You never know unless you try. 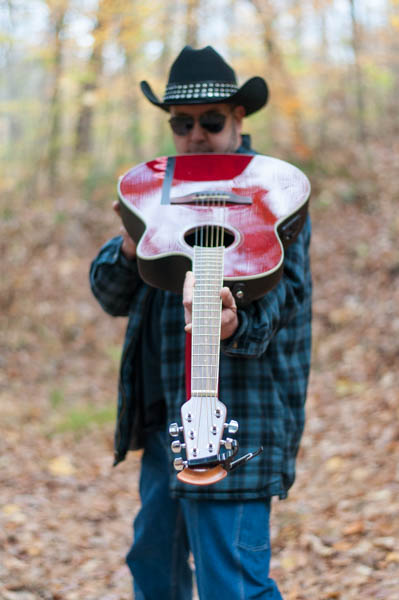 I suggested we do a few near a fallen log.  As a willing subject, he went for it.  I especially love how he decided to turn his guitar into a slide guitar for a few of the shots.

As the sun popped out toward the end of our session, we moved to a spot with the open sun for a different look.  Normally, I would stay away from open sun shots but for this particular shoot I think it achieved the different look we were going for.

In the end, we both had a lot of fun, laughing and joking throughout the session.  Without realizing it I had snapped almost 200 photos, plenty to choose from

Hello and welcome to my site!  My name is Amy, aka “fstop-mama”.  Here I share my photography, writing, and our simple lives in the 100 acre woods.  With a family photography business, I wish to expand into the realm of writing and private yoga instruction.  All are my passions.  Nature is my medicine.  This life is my love.