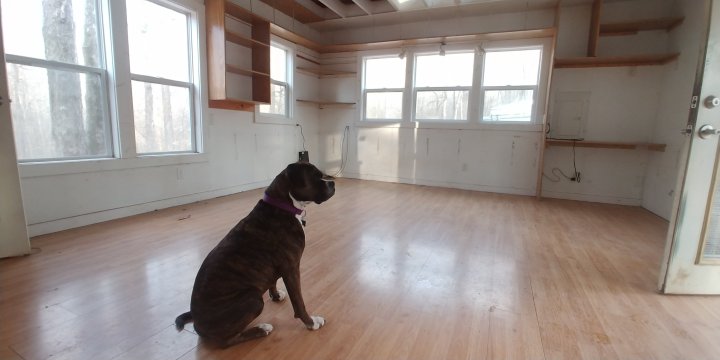 Some of you may be wondering why we would give up a wonderful rental property complete with a cabin on 100 acres of forested land. This is something I’ve wrestled with, whether or not to share the backstory. After some thought, I’ve decided to share a bit if only to let it go and gain closure.

When our landlord/friend moved back due to divorce, we honestly thought we could make it work with him there. Little did we know what lurked below the surface of our friend. Turns out he is a true narcissist. If you have never been around someone like this, consider yourself lucky. It is a very difficult personality to deal with. Add in a dash of bi-polar and passive-aggressiveness and you have a bad combination. Over the last almost 2 years we tried our best to deal with him the best we could. In the end we found ourselves at the mercy of what he wanted with no compromise. When the shop space was threatened to be taken away, that was our last straw. We made the decision to get ourselves out.

Arriving at Our Decision

Initially, we looked at buying property but that did not pan out for a variety of reasons. As things continued to deteriorate we started considering other options. Could we rent another place for awhile that would allow Shane to keep his shop intact? After looking around, that option was removed as finding a shop and living space proved to be rather difficult. We became frustrated at this point, feeling trapped and not sure what to do, only knowing we had to get out from under this situation as it was worsening by the minute.

One night, the movie Nomadland popped up on my Hulu list. It sounded interesting so we watched it. That movie caused us to think outside the box. A couple of years ago we thought of doing a van conversion and traveling part time. The idea intrigued us yet again. However, after looking into van conversions, we realized it wouldn’t work for us. Cost and time were two big factors. Plus space would be tough for full time living. This lead us to consider RVs. Funny thing, Shane and I said we would never own an RV. On a trip out west several years ago, I remember thinking why would anyone drive an RV around. Too cumbersome and not good on fuel economy. Turns out never say never. Because the more we looked into the more it fit us and worked with the situation we found ourselves backed into. The research process began.

Within no time we knew this was our out and it fit us to a T. As I’ve said all along, we have to work the problem. So we did. With remote work opportunities to replace the physical shop, it was time to give our notice, sell off our stuff, and find our new “home”, a Class-C RV.

Under normal circumstances most people would have time to plan and get things sold off. As for us, we knew we could only stay a month once we broke the news. Our landlord did not take the news well, because turns out narcissists like to be fully in control. By taking charge of our lives, we pulled the rug out from under him and shit hit the fan. Within a 25 day period, we sold off the shop, donated a bunch of our stuff, packed up the remaining to be stored at our good friend and neighbor’s house, found our RV, and said goodbye to the place once and for all. It was a madcap month of non-stop work but it felt great to get rid of stuff and finally be out of that situation.

Due to COVID, finding our RV proved to be harder than normal. The RV industry has exploded with record sales. Many local dealers are completely sold out of Class-C RV’s. Both new and used. We were in the used market. Doing a nationwide search, we feared we may have to go a great distance to find one. With the clock ticking, we worried we wouldn’t find one in time. While searching online every night we pressed on with packing up our lives.

We found two dealers a couple hours north of us with a few potentials. We drove up on a Friday morning to have a look. The first dealership had 6 potentials of which one would work but none of them felt right. Over lunch we felt dejected and wondered if we had made the right decision. The ones we looked at that morning were mostly junk if I’m honest. Not giving up we headed to the second dealer. Two of them already had sales pending. Our sales guy showed us to the back section of the lot. These were not retail ready as they had just come in. One looked promising and then we stepped into “the one”. We both knew instantly. We gave it a good look over both outside and in. It was in great condition and had the exact floorplan that would fit our needs best. However, it was more than we originally planned to spend. Shane said we have to make this one happen, it’s in great condition and we didn’t want to inherit someone’s problems.

We talked it over and decided we could do it. That day we put down our deposit and then found out it would be 2 weeks until we could pick it up. That would leave us in limbo for a few days but as our mantra throughout this whole process goes “work the problem”. (Credit: The Martian)

When we were able to get everything out of the cabin a full 5 days early, we went with being “homeless” for the remainder of the month.

Which all worked out as we had the opportunity to spend time with family during this waiting period. Spent the weekend with our kids, hiking, and enjoying each other’s company. and the remaining few days in Michigan with Shane’s family. The day we received the call our rig would be ready on April 1, 2021 we felt a wave of happiness flow through us.

Picking Up the RV

On April 1 we woke up early to pick up our RV. Harry, did our walk through and was very helpful, explaining everything to us. Did I mention we are brand new to this whole RVing thing? We have tent camped plenty but never RV’ed. It felt wonderful to be at this point, picking up our new home. As we drove away, it started to spit a bit of snow, and we said “the adventure begins”. The first night the temperature was 20 degrees (F). But our furnace worked well and kept us warm and cozy.

Our first spot was at our friend’s house as all of our stuff was stored there. We spent a few days going through things and deciding what would fit and where. Here we went through another round of paring down. In the end it seems you really don’t need as much as you think you do.

Specs of the RV

In case you are curious here are the specs.

And now the journey really begins. It’s been an interesting road to this point. Stay tuned for Part II, coming soon!

12 thoughts on “Transition to Full Time RV Life: Part I”