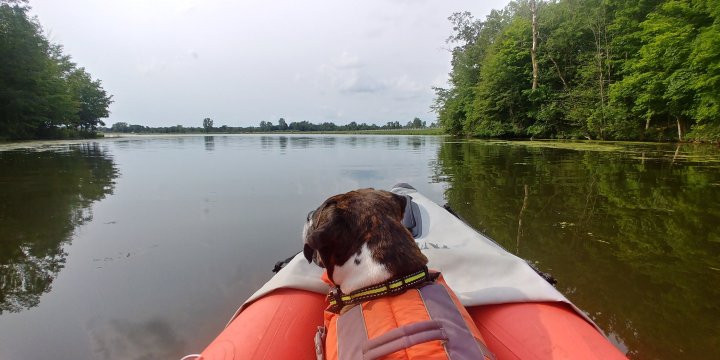 Our first official Michigan park since we started this full time RV adventure. After leaving Shane’s family’s house we trekked north about 2 hours to Ionia SRA. You might be wondering how we picked our first stop. Simply, campsite availability. The coastal parks are all booked up so we headed up the middle of the state. I found a place within 1-2 hours away with sites available and off we went. This time of year the parks are packed, especially the popular parks. This one is off the beaten path and had several sites to choose from, saving us from making reservations. We prefer selecting our site in person.

Upon arrival the first thing we noticed were all the mosquitoes. Just 2 hours north and they were thick. We sprayed ourselves up just to get our site picked out and paid for. All I can say to my Indiana friends, “we DO NOT have a crazy amount of mosquitoes in Indiana”. They were insane here. We had some bug spray left but would need to stock up while in town.

The next day at the store I couldn’t believe the shelves were wiped out of bug repellent and devices. There were a few remaining items left and I grabbed what looked like it would work best. To my surprise both the lotion and spray worked wonderfully as well as the Thermacell Latern. They saved us as the mosquitoes did not let up during our stay. Locals said they were worse than usual, mostly because of all the rain.

We decided to brave the lake for a kayaking session, armed with mosquito repellent of course. While inflating the kayaks they were thick but stayed off of us, thanks to the lotion. I used the spray on Josie and she was untouched. However, once we got out onto the lake, nothing. Not one mosquito. It was bliss. An entire afternoon bug free. The lake was so beautiful and serene. The water calm and the weather perfect.

We had to get a close up view of the spillway. It was heavily protected by large restricted barriers to save someone from going for a crazy ride.

During our stay we met a nice retired couple named Jim and Ellen along with their grandson Ashton. We ended up talking to them every day and spent some time with them at our site the last night we were there. I tried out my newly acquired (used) grill and it worked wonderfully. Plus we had a homemade pizza building station that turned out a great pizza night.

Despite the insane amount of mosquitoes, we had a wonderful time at this smaller park in Michigan. Lake Sessions was perfect for kayaking and was a nice break from the mosquitoes.

We noticed a few things about Michigan parks that differ from Indiana parks. One they have potable water refill at the dump site so you can refill water and dump all at the same time. This is very handy. As we found it takes twice as long at Indiana parks, where you dump than drive to a separate spot to fill your water. In Michigan the water is clearly marked “safe for drinking” and “not safe for drinking”. Also they have one central location for the trash in the park instead of dumpsters throughout the campground. Their fire pits are robust, made with concrete and they are deep, but no grate over top like Indiana. Lastly, their showers are individual stalls with an entrance door on the outside of the restrooms instead of an interior room with multiple shower stalls. We have our own shower and bathroom on board Ralphie, but I always like to check out the facilities.

Lastly, I must share the hardest thing for me to give up. Of all the things we had to part with, our beloved 2009 XC70 Volvo was by far the hardest for me. I absolutely loved that car. However, it cannot be flat towed and we had a car payment with it. Not wanting to tow a car on a trailer or dolly we knew it would have to go. Plus the extra expense of a car payment also had to go. Sadly, “The Moose” is gone. Here’s the story.

While camping at McCormick’s Creek the first time (May), Shane met an older couple while filling up our water jugs. They commented on how nice our Volvo was. Shane made a comment about it being for sale. Later that afternoon, the gentleman, Bill stopped by to say he was interested in buying it. Long story short, he was in no hurry and we still needed to find a replacement. We took their information and stayed in touch. Then on our second time camping at McCormick’s Creek (June), we met up with Bill and his wife Ginny at the campground. They live about an hour away and love to camp at McCormick’s. Bill had a proposition for us. He had a 1996 960 Volvo he wanted to sell. After taking it for a test drive at the park (they drove it to the park for us to check out), we talked about it and talked about it. It was funny to see the look on the gate attendant’s face when we drove back in with a different Volvo.

We couldn’t flat tow it but the price was right and it would work in the interim until we could find a towable car. After a lot of consideration and my reluctance we made the decision to do the trade. That’s right giving up our comfortable and lovely Volvo for a much older and not as nice Volvo. I was very sad to see “The Moose” go. I’m normally not attached to material things except for that car. We spent months looking for it and flew to New York to pick it up. It was truly a great car and I’ll miss it dearly. But for now I am grateful to have an inexpensive car that gets us from point A to B and is in relatively good condition given it’s age. Just for the record, it’s as old as my son! And that’s the last I’ll say on that.

The two Volvo’s side by side, the day we made the trade.

And the adventure continues…..

UP NEXT: Our first Boondockers Welcome Site